Seasons of change have the appearance of growth, excitement and renewal.  Everyone chomping at the bit to smash their goals, take on new challenges and get their sh*t together.

We all know that behind every Instagram snap and Facebook status update is a less-sparkly reality, but it’s easy to forget that we all struggle with the same insecurities and feelings of self-doubt when navigating change.

The undercurrent of anxiety of the back-to-school season.  The nervous energy that engulfs you as you mentally prepare for a difficult conversation with your child’s teacher.  The stress of wanting to grab a coffee with that mom you see every day at drop off, but being afraid they won’t want to.

It can be relentless — the internal voice that second-guesses your every decision.  Leaving you feeling unsure of what to do or how to move forward.

So you ask a friend for advice.

“Just be yourself,” they say.

Spoken with good intentions and meant to boost confidence and remind you of your inherent awesomeness, you can’t help but feel like a fraud.

Because you can’t see it.  Your badass, take-charge, I’m-not-afraid-of-anything self is buried deep beneath thoughts of

I can’t.
It’s too hard.
No one likes me.
There’s no way I could possibly.

Thanks Sandra, but I currently want to grab a few glasses of wine and binge watch Netflix in the hopes that this little conundrum will solve itself on its own, so I’m not sure “being myself” is really helpful right now.

So what is one left to do?

Remain stuck and annoyed, letting fear and discomfort run the show and keep you from reaching your goals?

Uhhh yeah, no thanks.

When I’m in a slump, feeling stuck and bankrupt of ideas I act as if I were someone else.

I’m not suggesting you forget who you are or become a radically different person, but rather that you consider how someone else — someone you look up to, respect and admire — would handle a similar situation.

If “being yourself” isn’t working it’s not because you aren’t good enough or lack character — it’s a sign you’ve let the noise of self-doubt and criticism run the show for far too long.

You’ve tricked yourself into believing you can’t/never could/aren’t good enough and continuing to play that runaway tape on repeat is only going to keep you right where you’re at.

How’s that working’ for ya?

Channel your inner Beyoncé, Ellen DeGeneres, or Brené Brown and take another look at your situation with fresh eyes.  It’s a lot easier to overcome the whispers of doubt when you’re embodying a total boss.

Doing so allows us to get out of our heads, take charge, and step more fully into our capabilities.

What would Beyoncé do?

How would Ellen handle this?

What would Brené say?

Do this often enough and one day you’ll wake up and realize that all of your acting “as if” you were brave/courageous/confident/a total badass has become your normal way of operating.

None of us has it together 24/7 and it’s okay if you need a little outside inspiration to dust the cobwebs off those qualities you’ve had tucked away in storage.

And make no mistake — that person who channels Oprah to summon the guts to speak out in the PTA meeting?  That person who embodies Melinda Gates to integrate work and motherhood?

YOU did it all on your own

The courage, resilience, perseverance, and fearlessness you wish you had in your most challenging moments?

It’s not Oprah’s or Melinda’s or Gaga’s or Serena’s.

It’s been right there inside you this whole time, just waiting to be found. 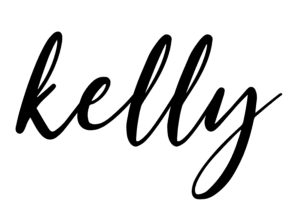 Kelly is the founder of kellybourne.ca, your one-stop digital resource for parenting strategies that actually work. Read more about how Kelly helps moms + dads get their parenting groove on…

STAY IN THE LOOP

Thanks for stopping by my little corner of the internet!

I hope you found the resources helpful and are able to leave feeling like the capable, confident, kick ass parent that you are!

Questions about upcoming workshops, booking Kelly to speak at your next event, or how to get one-on-one support?